Things To Do in Los Cabos
No Comments

A few years back, we were in Los Cabos with our adult daughter in September. We took a kayak / snorkel tour through Baja Wild. The website is BajaWild.com , not to be confused with CaboWild.com which is a worthless affiliate site. They call the tour we took the 3 Bay Crusade. We were fortunate that it was the off season , so we had personal service from Casey, one of the managers of Baja Wild at the time. My wife and I had a double kayak and my daughter was in a double with Casey. My wife and I were used to canoeing, but were a little out of shape. We had to work a bit to keep up in the swells off the tip of Los Cabos. Ok, we had to work a lot just to keep them in sight. 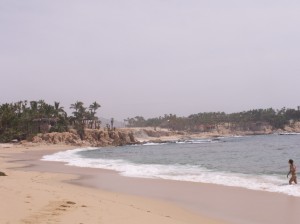 After a few minutes of paddling, Casey shouts out that he had seen rays jumping (and acting like flying fish). We had almost decided he was making it up or hallucinating, when we saw 4 or 5 rays leap from the water flapping their wings like seagulls. This act was repeated a few times. As naturalists explain most behaviors, Casey said this apparently has to do with mating.

One of the highlights of the trip was “surfing” the waves into shore in each of the bays. Waves were fairly calm that day we went, so I would guess this could be quite a rush on days with higher seas.

We snorkeled in a couple of the bays. The water was still a bit murky from a rare Cabo storm that had gone through. Not really much in the way of coral, but a fairly good assortment of fish. As I always say, a bad day snorkeling is better than a bad day doing almost anything else.

Baja Wild seems to be growing steadily. They now offer a growing variety of tours. I hope to use their services to complete one of the top items on my bucket list. That is swimming with the mammoth whale sharks that swim into the Sea of Cortes every summer. My wife Linda is not yet convinced to join me.   The  tour to Cabo Pulmo National Park is another of their tours that was not an option after the storm when we were there. It is supposed to be the best reef on the Baja.