One of the “must-do” lists of a guest visiting the Yucation Peninsula in Mexico is a visit to the ancient Mayan ruins showing how history played out. What comes to people’s mind first is the Chichen Itza, one of the “7 wonders of the World”. It takes several hours to get to the destination, often the visit is cumbersome. An interesting site is the older more natural work of Coba, much older that the Chichen Itza and larger than Tulum, you are still allowed to struggle up the mount of the pyramid!. It is about a half-hour from Tulum which has a lot of natural openings into the underground rivers known as “cenotes, which you could be tempted to explore on your way back. An interesting feature of Mayan history is its ancient calendar that sparks the curiosity of visitors. The calendar calculation shows a new era will begin in December 21, 2012. Also of note is that Coba has the “stela” (carved stones) showing the ancient Long count inscription on the stones. It is revealed that from count of the Mayan calendar when the 5,200 year long count ends, the world will see a rebirth.

Historians have evidenced that around 100 AD the Coba area grew and had an increase in its social and political status, making it one of the biggest and powerful states in the Yucatan region. Coba began a long power struggle with Chichen Itza at about 900 AD and few years later at 1000 AD, Coba relinquished its political weight among city states. It kept to itself the symbolic and religious importance and new constructed buildings between 1200-1500AD. It became a deserted town at about 1550 when the peninsula was conquered by Spanish invasion.

Coba is in the middle of a lush green expanse of jungle unlike the flat expanse surrounding Chichen Itza. This region is also prone to our flying insect friends, it is advisable you come along with your mosquito repellant. The vast area of the land entails that you come out with your soft and easy to navigate sneakers and a lot of water to quench the scotching heat from the sun. In El Castillo you find the Nohach Mul group of ruins that occurred there, except for the pyramid in Campeche that is standing, 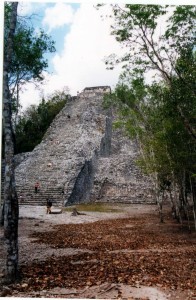 which is over 200 mile inland. It is the tallest pyramid in the Yucantan, outreaching EL Castillo at Chichen Itza. It is about 50minutes walking distance to get to El Castillo, you could rent the services of a bike for $3 per hour at a mini stand a few meters away from the entrance. You also have the option to hire the services of a tricycle and the driver carries you around for about $10. The tricycle drivers knows that a lot people could be tired from the long climb up the pyramid, so they are stationed just at the base of the pyramid to carry tired visitors back to the entrance. Believe me if you have successfully climbed to the top, a ride back to the entrance is worth every bit of the adventure. This long climb of El Castillo is not for the Lilly-livered. The steps are very steep at 120 paces and you definitely need to take a few rests as you ascend the steps, but the top view from the summit is worth the climb. As you ascend the steps the cool breeze of nature is blowing to help cool down your temperature. You may also want to take this climb with your lunch box close to your side and having a much overlooking the jungle. It is easier getting back down backwards and try not to look down so you don’t freak out!

You can start your tour as early as the site opens daily from 8 AM – 5 PM and sometimes longer. The buses take off from Coba as early as 10 AM this would help you to avoid the hot parts of the day. The fare is charged at 51 pesos, kit is free ride for children that are younger than 12 years of age. Parking in the lot is 50 pesos and video/ camera footage permit are charged at 41pesos. You can access Coba easily by using the public buses if you aren’t driving, as well there are the many tour operators available.
You may want to carry your bug repellent along and also put on a foot friendly walking shoes, if you have the notion of exploring the “cenote”. We strongly recommend the use of a biodegradable bug repellent as this is more eco friendly and helps preserve the ecosystem.