Things To Do in Puerto Vallarta, Vidanta Nuevo Vallarta
No Comments

We are always looking for new experiences and we made the wise choice to take a Puerto Vallarta Walking Food Tour. Last month we made a very good choice and signed up for the 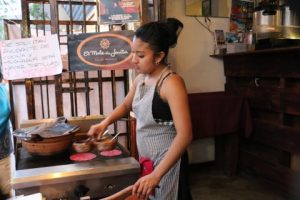 Mole being made by hand

walking food tour offered by Vallarta Eats.  Our tour leader ,  steeps the tour in Mexican history and all the food stops are tied to the history and the culture, including pre-hispanic cultures.  We will walk you through the stops and leave your mouth watering.

(Pronounced Moh -lay with the accent on the first syllable. ).  We ate three enchiladas each one covered with a different mole,  red, green,  poblano (which is brown and my personal favorite)

Shrimp on a Stick. 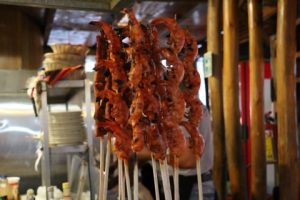 We walked toward the beach for the famous fish and shrimp on a stick at Langosta Loca.  Before grilling, they are coated with a mild red seasoning.   It is ok, but really comes to life with recommended squeeze of lime and a dash of the Huichol salsa recommended by our guide,  She asks us if we want more.  Already we are wising up that the answer needs to be consistently .... no gracias.

Next we walked across the pedestrian bridge to the Malecon.   There we were offered samples of 4 different kinds of roasted corn,  Once we chose the one we liked 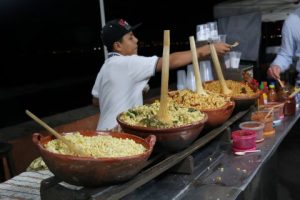 Roasted corn on the Malecon

, we were given a small plastic glass.   with corn.  If you order it "con todo"  which means with everyting, you get  mayonnaise, sour cream, Parmesan cheese, and various versions of hot peppers.   I was insightful enough to ask them to go light on the mayonnaise.  If you take the tour, this is the place to start eating half of what they serve you. That is if you you want to be able to walk at the end of the evening.

a few shorts steps way,  we find a genleman in traditional Mexican garb,  with a 5 gallon plasic jug an interesting piece of crockery.  He pours some half from each container and we experience a traditional fermented coconut, probiotic drink.  Ok. you only live once.   We really liked it, hey Mikey !!   He even added some cut up 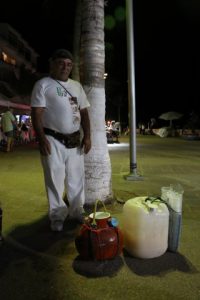 apple and walnuts on top.  However, we would have never walked up and asked him for a drink without the tour.  This is when we learnsomething interesting . All the vendors in the downtown tourist area are licensed and inspected by the city government.

Next we walk up to the main square under the shadow of the Our Lady of Guadalupe Church.  The traditional restaurant  El Campanario that specializes in Tamales and the traditional soup called Pozole.  This is the best stop yet for some of our group.   I myself do not love tamales .  The Pozole here is the white type (as opposed to the green tomatillo type)  and a bit bland for my tastes.   but it was still interesting to try it.  The taco Dorado with requeson cheese was more up my alley.   The drink they serve is atole, it is a thick drink made with hominy corn flour, sugar, cinnamon, and vanilla.   Chocolate is an optional addition.  It is quite tasty but a bit much after 2 or 3 hours of eating. 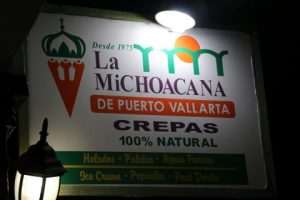 Thank Goodness it is downhill to the final stop.   A traditional family business from the state of Michoacon serves popsicles and ice cream.  the most interesting flavor is tamarind and chile .  It is sweet, sour and spicy all at once.

Three hours and a dozen exotic flavors mixed with history and culture  for only $55.   What a great deal.  you can find the tour on line at  Vallarta Eats website  .  The walking food  tour we took in Puerto Vallarta was aptly named mole and pozole, but we suspect the other tours they offer  are equally interesting and delicious.

Linda and John- Founders and Bloggers
Nina and Allen- Operations