Tips for Tourists Driving in Mexico 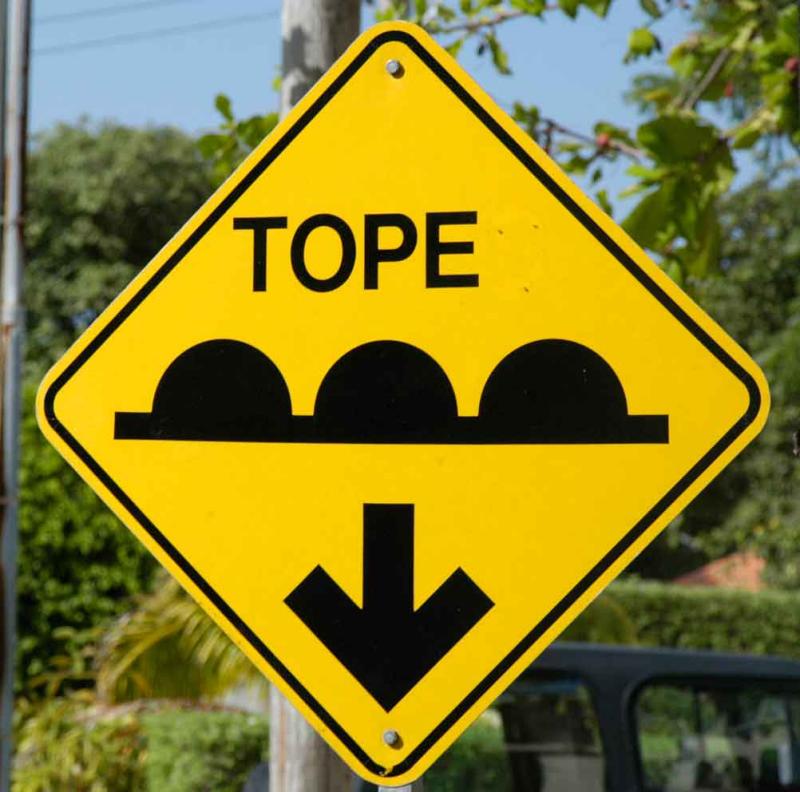 We like our freedom on vacation, so we almost always rent a car in Mexico. Driving in Mexico is not that difficult. I would say it is similar to most city driving in the U.S. Drivers are assertive, but USUALLY not too crazy. However, there probably are a few things you really need to know before getting behind the wheel.

The phrase “speed bumps” is really inadequate to describe the top driving hazard in Mexico. The little ones called topes (TOH-pays) are ubiquitous. Appearing randomly for no apparent reason, they are sometimes heralded by signs and sometimes not. These are very unpleasant if you don’t see them and neglect to slow down.

However, topes are nothing compared to the huge speed bumps occasionally found on highways and frequently in towns, which have a 45-degree ramp on each side and a flat top. If you don’t see these and don’t slow down, you will be airborne. We have seen it happen.

This is the primary difference between driving in Mexico and driving in the U.S. A left turn signal may mean, “I am turning left,” but it is more likely to mean, “It is clear, you can pass me now.” So do not stop in the driving lane and turn your left turn signal on!! The protocol for left turns is to pull over to the right shoulder and wait for traffic to clear before turning left. Seriously!! That’s what you do!

Also, in bigger towns where there is a central through lane with a separator and an outside lane, you are supposed to cut across the divider when there is an opening in it to the right outside lane and wait for a green arrow to cross left in front of the main lane while it is stopped. Seems a little crazy to us, but that is how it works. Some places, there are what we would call conventional left-turn lanes and you can do what comes naturally.

You will see many warnings against driving at night. Things are not marked well, pedestrians and bicyclists are difficult to see, and speed bumps appear out of nowhere. We have driven at night on multiple occasions without incident. We would suggest not driving alone at night. Also, acknowledge that the later you drive, the more likely you are to encounter drunk drivers, which is reportedly an even bigger problem in Mexico than in the rest of North America.

Police in Mexico do not have as much of a public service mindset as in the U.S. or Canada. When driving in any foreign country, it is much better to just not break the laws. Drive the speed limit, everyone wear their seat belts and don’t turn on red. There are stories about police stopping tourists and threatening tickets and fines while hoping for a bribe. We have only had that happen once in 10 years, and we just said, “Fine, let’s go down to the station,” and they eventually gave up. Whatever you do, be polite and respectful. Do not give them your car rental paperwork.

We've heard stories of people being cheated at some gas stations. We have never had that happen (that we know of). Though as a precaution, it's probably best to get out of the car and keep an eye on the pump. You will need to have cash; gas stations are government-run and do not take credit cards. Just make sure the pump is reset to zero before your fill-up starts.

If you follow these simple tips, you will be able to safely drive in Mexico and enjoy exploring all the country has to offer!